CraftsNordic is a celebration of the unique crafts found in the nordic countries. It is a showcase of designs, but also a look at the soul and creativity behind some of these amazing Nordic brands.

The history of Røros Bryggeri & Minneralvannfabrikk AS:

“A family tradition lives on.”

Oliver Langen (Soda-Oliver) started as the stewerd of Røros Minneralvannfabrikk in 1900 in a small and modest facility in Flanderborg in Røros. He later bought the small fabric which had a modest production capacity of 400 bottles a day. 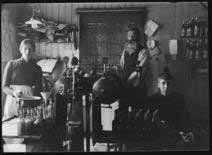 Røros Minneralvannfabrikk in the beginning of 19th century. Oliver Langen is the one in the middle.

In 1937 his son Ole Langen (Soda-Ole) took over the company and he ran the company until the end of the 40s. At this time Erik Sandbakken (Soda-Erik) got married to the daughter of Ole Langen, Gunnvor Langen and Erik became the owners of the company. In the same period Røros Minneralvannfabrikk moved to newer facilities in Johan Falkenbergets road. This became the beginning of the company’s growth period, where Røros Minnerallvannfabrikk grew to be a distributor of beer and soda for E.C. Dahls Bryggeri, Aktiebryggeriet AS and Hamar Bryggeri in a region that stretched from Rendalen in the south through Folldal in the west, the swedish border in the east and north to Holtälen. This were the days of beer monopoly and everything in Røros was sold in small shops until early 70s.

Kåre Langen and Erik Sandbakken by the “Brusbilen” (“The Soda Car”) outside the soda factory and factory store in Johan Falkenbergets Road around 1950.

The Production of soda came to an end in 1963 when the company moved to bigger facilities in Tollef Bredals Road and became a distribution company. In 1968 it was all over after E.C. Dahls took over the whole company. Jørn Ketil Sandbakken received a job in E.C. Dahls Bryggeri and Røros Minneralvannfabrikk was history until both Jørn Ketil and Dag Aadne Sandbakken joined in as owners in the new Røros Bryggeri and Minneralvannfabrikk in 2009. This is how a more than 100 years old family tradition lives on in Røros.

Røros, october 1670. The people starves and the workers at Røros mine company haven’t recieved their sallary in several years. Spell-Ola has to og to the king in Copenhagen again. Maybe their complaint will work this time? But the director gets news about the plans and Spell-Ola gets throw in chains in Mørkstuggu. In anger the workers surrounds the home of the director. It is working class against upper class, axe against chord. After a swift, but hard fight the workers triumphs after taring Mørkstuggu apart. Spell-Ola are freed from the chains and the workers can finally celebrate their sallary.

Area of use: Light lager with a certain hint of hop. This beer is base on german and czech beer traditions. Goes well with courses of fish, light meat, salt food, flavorful and strong food, as well as light cheese.

Kølfogden Hedstrøm is An-Magritt’s strict, but at the same time loving and always present guardian. He is a figure that has been resurrected from the dead. He has escaped for Kalmar through Falun and over to the area around Røros and Ålen. He has come to guard the roads that is beeing used to transport coal to the mines. His dreadful appearance makes him close his eyes so he can’t see his own face in the water reflection in the rivers. Kølfogden is said to be the voice of the writer in «The Bread of the Night, and Falkberget has announced that «I don’t know if Kølfogden is born, but I doubt that he ever died».

Area of use: Dark and rich beer with roots from United Kingdom. Goes well with grilled meat and vegetables, as well as pink fish, seafood and soft cheese.

Johannes Konstknekt has a dream. He dreams of building the perfect waterwheel. After being expelled from Freiberg Hüttenschule after to many visits in the pubs of the town, he arrives the develish landscape around the smelter of Cornelia in Ålen. The young and visionary scientist meets the love of his life, An-Magritt. Together they fight through bad years, injustice and unhappiness. With his life at stake he learns how to handle the mysteries of the waterwheel. A mad man kills Johannes Konstknekt, but his dreams becomes real and lives on long after his death.

Area of use: A german inspired weat beer with light sweetness and a hint of citrus and bitterness. This beer goes well with fish, seafood, chicken, salads and fruit desserts.

The bull Hovistuten is more like a half-human with four hooves and the loyal friend and servant of An-Magritt. With raw power he pulls the plows through the old swamps while he tub and groan. He rolls over big stones and rotten roots while his red eyes stares into the ground. This is how the people make a living in the harsh enviroment in and around the mines. Strong wind, snow and hail whips against the skull of Hovistuten, but not even he can live without sunshine. The places where he plows the shiny plow through the fields and in the light from the full moon, that is where the crop grows best.

Area of use: Inspired by English types of beer with less carbonation and a distinct, aromatic hop. This beer goes well with heavy meals such as red meat, pizza, lasagne and barbeque.

Bersens Bayer has its name from miners that for forced upon to live by the mines in the mountain from monday to friday throughout the hole year. After ten hours of hard work in darkness they were stowed into small barracks with hundreds of men. In the crowded barracks they har the opertunity to rest and make some food over a small fire in the middle of the barrack. Most of them also runned a small farm so that they could secure themself against bad years and to supply the mine company with horses and bulls for transportation. The Bayer came to Norway around the middle of the 19th century, and was something a hardworkin miner would appriciate when a long and hard week was over.

An-Magritt grew up among men in a harsh and cold enviroment minted by hate and brutality. She knew how to take care of her self and fought against injustice and suppression. With her loyal companion Hovistuten, she fights a hard and unyielding fight against the harsh weather, while she takes the copper over the mountain. Behind the brutal reality she has a glimp of a better life. Her love for Johannes Konstknekt melts the ice in her veins and wakes up a need for rebellion that none can stop. Through a storm of pain and suffering An-Magritt keeps on fighting and never gives up her dreams and hope of a better life.

Area of use: Light and aromatic beer that’s low on bitterness and well suited for food such as chicken, fish, pork, salads and sour courses.